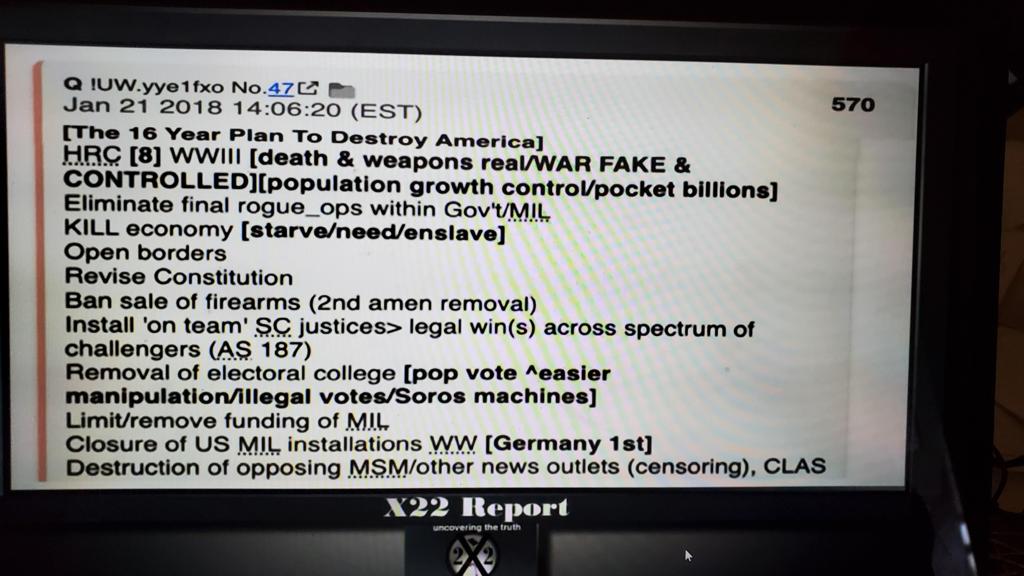 Am I the only one

Dems are lying to us

Dems are lying to us

THE GOOD GUYS CAPTURED THE AMERICAN FLAG “On August 12, 1999 we filed copyrights on Title 4, 101.9 dimension flags. Title 4 Section one, two, and three, in quantum grammar, on mechanics of how the flag would be. We filed that at the United Nations and we filed it with the United States Postal Service – the reason why we filed it with the United States Postal Service is because the Post Offices worldwide authorize each country’s government – each country’s banking system each country’s military,” Gould said. “The flag was claimed by my partner David-Wynn: Miller and myself,” Gould said. “The United States was coming out of Bankruptcy, so we filed on the flag, and then they had to vacate the guidelines which was the Constitution of the United States and the Articles and the Bill of Rights,” Gould said. “What that means is the federal government had to physically vacate the District of Columbia, and the Trustee for that was the President of the United States. But, because the guidelines were null and void, which were the guidelines to elect a Trustee, which was the President, they can then vacate the District of Columbia, which was the 2000 election – the ‘Florida Chads,” Gould said. “They vacated the Trusteeship which means the Constitution of the United States and the Bill of Rights went bye-bye. They are no longer. So you can’t go into court and use those concepts because they will laugh at you and lock you up,” Gould said. Gould continued. “They had everybody looking at the Florida Chads – what they weren’t telling you was they slid it in to a foreign vessel in dry dock and made a determination at the U.S. Supreme Court was that the U.S. Supreme Court was the chief location under yellow fringe flag – to direct and fool the people so the People would only look at the Supreme Court. Now you got to remember the United States Supreme Court can only give you an opinion – they cannot give you a fact – no Law or Facts should be tried in court – what that is, is you can’t put your facts on trial in court; only put the condition of mind on trial,” Gould said.

What you don't Know about Ukraine

what Really Happened in 911 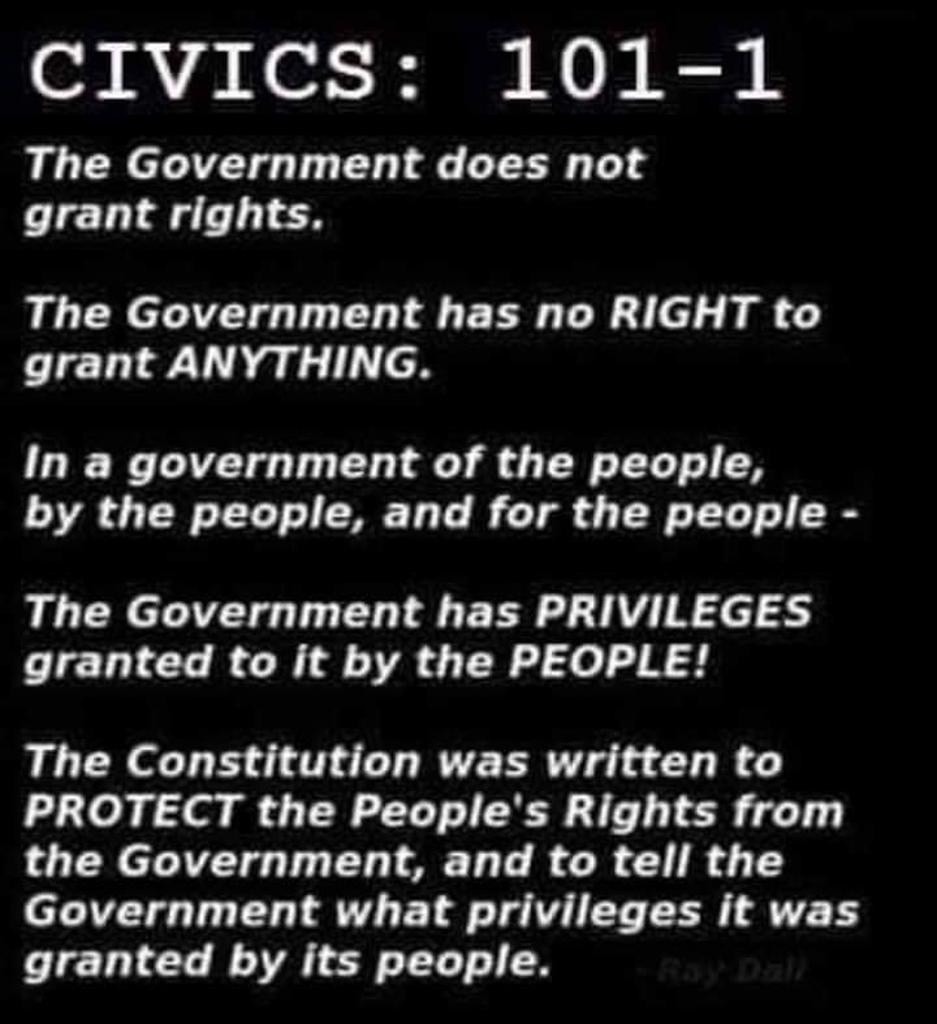 The Bill of Rights

The first 10 amendments to the Constitution, known as the Bill of Rights, guarantee essential rights and civil liberties, such as the right to free speech, the right to bear arms, and the right to a fair trial, as well as protecting the role of the states in American government.

The Preamble to The Bill of Rights

Congress of the United States
begun and held at the City of New-York, on
Wednesday the fourth of March, one thousand seven hundred and eighty nine.

THE Conventions of a number of the States, having at the time of their adopting the Constitution, expressed a desire, in order to prevent misconstruction or abuse of its powers, that further declaratory and restrictive clauses should be added: And as extending the ground of public confidence in the Government, will best ensure the beneficent ends of its institution.

RESOLVED by the Senate and House of Representatives of the United States of America, in Congress assembled, two thirds of both Houses concurring, that the following Articles be proposed to the Legislatures of the several States, as amendments to the Constitution of the United States, all, or any of which Articles, when ratified by three fourths of the said Legislatures, to be valid to all intents and purposes, as part of the said Constitution; viz.

ARTICLES in addition to, and Amendment of the Constitution of the United States of America, proposed by Congress, and ratified by the Legislatures of the several States, pursuant to the fifth Article of the original Constitution.

Note: The following text is a transcription of the first ten amendments to the Constitution in their original form. These amendments were ratified December 15, 1791, and form what is known as the "Bill of Rights."

Congress shall make no law respecting an establishment of religion, or prohibiting the free exercise thereof; or abridging the freedom of speech, or of the press; or the right of the people peaceably to assemble, and to petition the Government for a redress of grievances.

A well regulated Militia, being necessary to the security of a free State, the right of the people to keep and bear Arms, shall not be infringed.

No Soldier shall, in time of peace be quartered in any house, without the consent of the Owner, nor in time of war, but in a manner to be prescribed by law.

The right of the people to be secure in their persons, houses, papers, and effects, against unreasonable searches and seizures, shall not be violated, and no Warrants shall issue, but upon probable cause, supported by Oath or affirmation, and particularly describing the place to be searched, and the persons or things to be seized.

No person shall be held to answer for a capital, or otherwise infamous crime, unless on a presentment or indictment of a Grand Jury, except in cases arising in the land or naval forces, or in the Militia, when in actual service in time of War or public danger; nor shall any person be subject for the same offence to be twice put in jeopardy of life or limb; nor shall be compelled in any criminal case to be a witness against himself, nor be deprived of life, liberty, or property, without due process of law; nor shall private property be taken for public use, without just compensation.

In all criminal prosecutions, the accused shall enjoy the right to a speedy and public trial, by an impartial jury of the State and district wherein the crime shall have been committed, which district shall have been previously ascertained by law, and to be informed of the nature and cause of the accusation; to be confronted with the witnesses against him; to have compulsory process for obtaining witnesses in his favor, and to have the Assistance of Counsel for his defence.

In Suits at common law, where the value in controversy shall exceed twenty dollars, the right of trial by jury shall be preserved, and no fact tried by a jury, shall be otherwise re-examined in any Court of the United States, than according to the rules of the common law.

Excessive bail shall not be required, nor excessive fines imposed, nor cruel and unusual punishments inflicted.

The enumeration in the Constitution, of certain rights, shall not be construed to deny or disparage others retained by the people.

The powers not delegated to the United States by the Constitution, nor prohibited by it to the States, are reserved to the States respectively, or to the people.

A Letter to the Unvaccinated.

OCLA researcher Dr. Denis Rancourt and several fellow Canadian academics penned an open letter to support those who have decided not to accept the COVID-19 vaccine.

The group emphasizes the voluntary nature of this medical treatment as well as the need for informed consent and individual risk-benefit assessment. They reject the pressure exerted by public health officials, the news and social media, and fellow citizens.

Control over our bodily integrity may well be the ultimate frontier of the fight to protect civil liberties. Read the letter below or as a PDF here.

Open Letter to the Unvaccinated

You are not alone! As of 28 July 2021, 29% of Canadians have not received a COVID-19 vaccine, and an additional 14% have received one shot. In the US and in the European Union, less than half the population is fully vaccinated, and even in Israel, the “world’s lab” according to Pfizer, one third of people remain completely unvaccinated. Politicians and the media have taken a uniform view, scapegoating the unvaccinated for the troubles that have ensued after eighteen months of fearmongering and lockdowns. It’s time to set the record straight.

It is entirely reasonable and legitimate to say ‘no’ to insufficiently tested vaccines for which there is no reliable science. You have a right to assert guardianship of your body and to refuse medical treatments if you see fit. You are right to say ‘no’ to a violation of your dignity, your integrity and your bodily autonomy. It is your body, and you have the right to choose. You are right to fight for your children against their mass vaccination in school.

You are right to question whether free and informed consent is at all possible under present circumstances. Long-term effects are unknown. Transgenerational effects are unknown. Vaccine-induced deregulation of natural immunity is unknown. Potential harm is unknown as the adverse event reporting is delayed, incomplete and inconsistent between jurisdictions.

You are being targeted by mainstream media, government social engineering campaigns, unjust rules and policies, collaborating employers, and the social-media mob.

You are being told that you are now the problem and that the world cannot get back to normal unless you get vaccinated.

You are being viciously scapegoated by propaganda and pressured by others around you. Remember; there is nothing wrong with you.

You are inaccurately accused of being a factory for new SARS-CoV-2 variants, when in fact, according to leading scientists, your natural immune system generates immunity to multiple components of the virus. This will promote your protection against a vast range of viral variants and abrogates further spread to anyone else.

You are justified in demanding independent peer-reviewed studies, not funded by multinational pharmaceutical companies. All the peer-reviewed studies of short-term safety and short-term efficacy have been funded, organized, coordinated, and supported by these for-profit corporations; and none of the study data have been made public or available to researchers who don’t work for these companies.

You are right to question the preliminary vaccine trial results. The claimed high values of relative efficacy rely on small numbers of tenuously determined “infections.”  The studies were also not blind, where people giving the injections admittedly knew or could deduce whether they were injecting the experimental vaccine or the placebo. This is not acceptable scientific methodology for vaccine trials.

You are correct in your calls for a diversity of scientific opinions. Like in nature, we need a polyculture of information and its interpretations. And we don’t have that right now. Choosing not to take the vaccine is holding space for reason, transparency and accountability to emerge. You are right to ask, ‘What comes next when we give away authority over our own bodies?’

Do not be intimidated. You are showing resilience, integrity and grit. You are coming together in your communities, making plans to help one another and standing for scientific accountability and free speech, which are required for society to thrive. We are among many who stand with you.

Interested in becoming a sponsor of Wylie Football League?